UPDATE (September 13, 2019, at 10:15 am) DANVILLE, Va. (AP) – A judge has ordered a psychological evaluation for the man who police say killed the wife, son and mother-in-law of a minor league baseball pitcher.

The Danville Register & Bee reports the order was made Thursday by Judge Brian Turpin in the Pittsylvania Juvenile and Domestic Relations District Court. The evaluation for 18-year-old Matthew Bernard is expected to be completed by the end of October.

Emily Bivens was married to Blake Bivens, a pitcher for the Montgomery Biscuits, a Double-A affiliate of the Tampa Bay Rays. Cullen Bivens was the couple’s 1-year-old child.

Bernard has been charged with three counts of first-degree murder and related charges.

UPDATE: (September 12, 2019, at 11:30 am) DANVILLE, Va. (AP) – The Virginia man who police say killed the wife, son and mother-in-law of a minor league baseball pitcher has been formally arraigned.

Officials with the Pittsylvania Juvenile and Domestic Relations District Court said by phone Thursday that Matthew Bernard was arraigned on three counts of first-degree murder and weapons-related charges. The 18-year-old is being held in jail without bail.

Emily Bivens was married to Blake Bivens, a pitcher for the Montgomery Biscuits, a Double-A affiliate of the Tampa Bay Rays. Cullen Bivens was the couple’s 1-year-old child.

Court officials said Bernard’s court-appointed attorney is James Martin. He did not immediately respond to a phone message seeking comment.

A teenage suspect in a triple murder in Virginia was taken into custody after fleeing from authorities while naked.

Matthew Bernard, 18, of Keeling, Virginia, was arrested on three counts of first-degree murder on Tuesday afternoon, according to the Pittsylvania County Sheriff’s Office.

He is believed to have shot and killed three relatives at a home in Keeling, an unincorporated area near Virginia’s southern border with North Carolina.

While responding to a 911 call about someone being shot on Tuesday morning, deputies found the body of one of the victims, a woman, in the driveway of the home, while the two other victims — a child and a second woman — were found dead inside the house, the sheriff’s office said.

From everyone here in Princeton – 🙏 https://t.co/5MHCKfD8OD

“This was a shock to our community,” Pittsylvania County Sheriff Mike Taylor told reporters on Tuesday. “It’s just a reminder of how fragile life is.”

Danville Community College in Danville, Virginia, was under lockdown Tuesday as a “precautionary” measure after Bernard, who was a student there, was identified as the suspect at-large in the slayings, according to the Danville Police Department. He was said to be armed and dangerous.

ABC affiliate WSET of Lynchburg, Virginia, was in a media staging area at the scene in Keeling Tuesday afternoon when suddenly Bernard, who wasn’t wearing any clothes, ran out from a nearby wooded area and attacked a church groundskeeper then took off again.

“I saw a male, tall skinny male, with no clothes on running around,” a woman told local reporters. “He took off running.”

Authorities chased Bernard down the street and were able to apprehend the teen, who was taken to a local hospital for treatment, according to WSET.

The victims’ names have not been released, but according to ESPN, the three victims were the wife, child and mother-in-law of Blake Bivens, a Double-A pitcher in the Tampa Bay Rays organization.

The Tampa Bay Rays said in a statement: “Blake Bivens, a pitcher with our Double-A affiliate, the Montgomery Biscuits, suffered a terrible family tragedy in southern Virginia. Our hearts are broken for Blake. We are grieving with him and will support him any way we can.”

The Biscuits CEO and Managing Owner Lou DiBella said in a statement, “The Biscuits thoughts and prayers are with Blake and all those who have been impacted by this tragedy.” 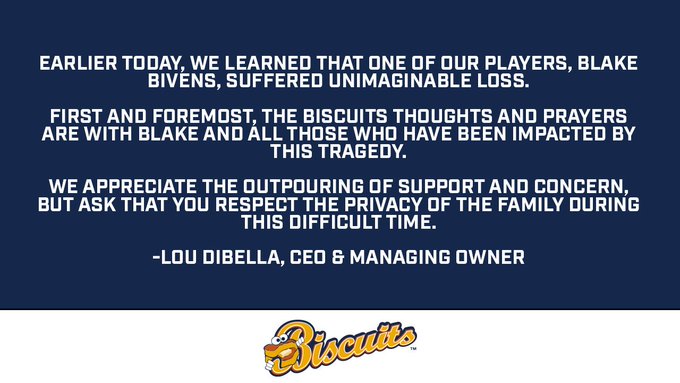 The victims’ bodies were taken to the Roanoke office of Virginia’s medical examiner for autopsies to determine the cause and manner of death.

Bernard’s first court appearance has not yet been scheduled, according to the sheriff’s office.

As states across the U.S now prepare individual abortion legislation following Roe v Wade overturn, West Virginia is also about to decide what is...